In 1985, 25-year-old Joe Simpson and another British climber, Simon Yates, 21, were climbing the west face of Siula Grande in the Peruvian Andes when Simpson fell and badly broke his leg. Further down their descent, Yates was forced to abandon Simpson on the mountainside. Simpson’s book about his improbable survival, Touching the Void, has sold more than 1m copies and in 2003 became a Bafta-winning film. (In the process, Simpson became a hero and Yates an arch villain – both of which notions Simpson strongly rejects.) Now the events have also inspired a play, which opened at the Bristol Old Vic last year and this month transfers to London’s West End. Simpson, 59, lives in the Peak District, and is the author of eight books. 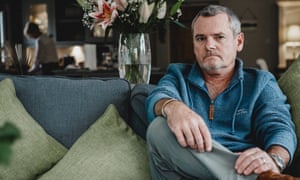 What’s been your involvement in Touching the Void, the play?
Well, my first reaction was: “Good luck! How the hell are you going to stage that?” Then [writer] David Greig and [director] Tom Morris came up to see me and I made it clear that I didn’t want any involvement in the writing or the creation of the work. So if it succeeded, it was their success, and if it failed, it was their failure. A coward’s way out! Then I sat back and watched these five-star reviews coming in and thought: “Bloody hell, here we go again…” It’s strange. In fact, it’s more than a bit strange. What next? A bloody musical?

Are you able to judge it as a piece of entertainment?
In short, no. I’m really the worst person to ask for an opinion of a version of Touching the Void. But the play tries, I think, to delve deeper into the nature of mountaineering and individuals putting their life at risk for something they love, and possibly paying a heavy price.

Why does this story, 35 years on, continue to captivate people?
I was reading somewhere there’s a notion that’s very embedded in our cultural history called the myth of the returning warrior. It’s in the sagas of Beowulf, everything from Robert the Bruce, even Jesus Christ: of somebody going away to a very dark, scary place, often death or into Hades, and coming back. Of course, I might just be talking out my arse, because I’ve been asked this question so many times, but I’ve always thought it’s more than just an adventure story.

Did you see Free Solo, the Oscar-winning documentary film about Alex Honnold’s attempt to climb El Capitan in Yosemite without ropes?
Holy shit, I couldn’t watch it! I did, but crikey, that just scared the crap out of me.

Honnold tells his girlfriend he has no obligation to stay safe for her. Did you recognise that single-mindedness?
Yeah, to a degree. Alex Honnold is an exception on various levels, but I was always struck by how selfish serious mountaineering is: you might love it, you might get killed and you have accepted that risk, but it’s your loved ones that pay. To do something like that, you have to be a little bit unhinged. That’s not an insult. I think all top sportsmen are mad as a bag of ferrets, frankly; they are doing things to an obsessional level that many people would regard as quite unhealthy.

You went back to climbing after your accident, and only stopped in 2009. What’s taken its place?
Nothing. Nothing ever will. I actually surprised myself, I sat up on this peak in Nepal in 2009 and I could see however many 8,000-metre peaks: Everest, Lhotse. It was a gorgeous day. I knew I had a three-and-a-half-day descent and it was going to be murderous on my knee. So I thought: “It doesn’t get much better than this. This is the time to stop.” And I just went to Kathmandu and sold all my gear, and I never climbed again. But it was like grief in a way, and it’s because it’s something you spent your entire life doing. It’s what you live for and then suddenly it’s not there.

What’s recreation now for you?
I’ve done various things like paragliding and they’re fun, but they haven’t come near replacing climbing. So I took up cabinet making. And, in fact, this morning, I was just teaching myself to weld.

To weld?
To weld. I just like learning new skills, I think. I absolutely adore working with wood. And I’ve realised I’m an absolutely crap cabinet maker.

On Desert Island Discs in 2004, you said you never expected to find a life partner, but you’ve since got married to Corrinne. Did you surprise yourself?
Yeah, I bloody did! But it’s not a coincidence that it was after I stopped mountaineering. While I climbed, I was too selfish. But it just proves how completely wrong you can be all the time. Which is rather wonderful.

You’ve described what happened to you in the Andes as a privilege but also a regret. How do you look back on it now?
With some degree of amazement, actually. You think you’ve got some plan for your life and that’s the first thing that goes out the window, isn’t it? It’s that famous Mike Tyson saying: you have a plan until someone punches you in the face. On one level, if I hadn’t had that experience in Peru, I would never have become a writer, which I love. I wouldn’t have become successful and I would not have the comfortable life I now have. So it’s a bit ripe to start moaning about it. But on another level, there is a regret that I never really did find out what I could do from a mountaineering point of view. I sometimes wonder, “what if…?” But, actually, the most likely “what if” is that I’d be dead.